Projects > Memories for the Future 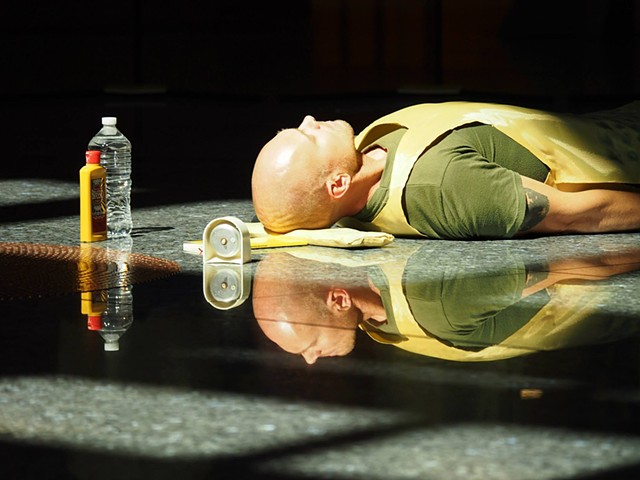 Memories for the Future
< previous next >

Artist Michael Barrett, a former Marine, polishes nearly 7,000 pennies – one for every war casualty between 2001 & 2014 – as part of his Memories for the Future exhibit in the Clark County Government Center Rotunda Gallery. The project is scheduled for 8 work weeks, which includes 5, 8 hour work days (Mon. - Fri. 9 am - 5 pm), totaling 320 hours over 40 days.

Over the 8 week time span, Barrett's mission is to create a tangible, yet fragile symbol of recognition, mirroring the circular footprint of the Government Center Rotunda. Using a Kevlar ballistic apron, a book, metal polish and 6,802 U.S. pennies, Michael is to individually shine each penny, while creating a spiral mosaic on the rotunda floor.

Crawling on his knees while following the spiraling labyrinth, as a conscious ritual for growth, he dedicates his sole attention to every penny and delicately acknowledges their very importance to the make up of the larger picture. The movements between the inner (intuitive, intangible) world and the outer (matter, manifested) world are mapped by the spiraling of archetypal rings, marking the evolution of humankind on both an individual and collective scale.

Operation Enduring Freedom in Afghanistan and Operation Iraqi Freedom have been two of the longest and most controversial wars in United States history. With Nevada having lost 50 of its residents during these foreign conflicts, "Memories for the Future" touches home on a personal level.

A stated goal of this project is to avoid commentary about war itself, but rather to serve solely as a memorial to those government employees who have paid the ultimate price. By separating the issue of the service of the individual men and women from the issue of U.S. policy in the Middle East, the intention of this project is to begin a process of national reconciliation.

The interactive, site-specific exhibit is on display through Memorial Day weekend May 23, 2014.